Things to do in Amsterdam in April – King´s Day 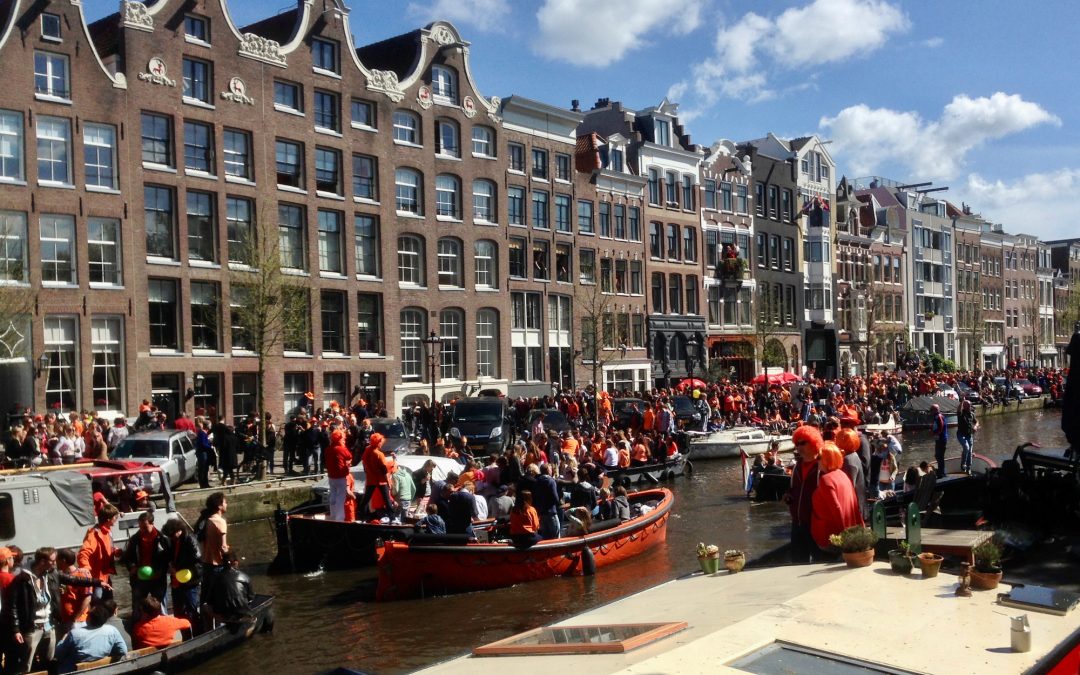 The Netherlands have been celebrating the birthday of their monarchs since many decades. When King Willem Alexander II ascended to the throne in 2013 King´s Day was moved to April 27th and thus did the public bank holiday to the monarch´s honour. Up to then Queen Beatrix celebrated her birthday on April 30th, which was actually her mother´s, Queen Juliana´s birthday. Her own is in cold and rainy January, a season you would want to avoid.

During this festive day you can expect a truly relaxed party atmosphere throughout the whole city. People will dress in orange, will have make up in orange, dye their hair orange and decorate their city and actually the whole country in orange. It is the colour of Royal Family, the House of Orange.

All over the city you will find festivals and dance events, mostly outdoors. The beautiful canals will be crowded with boats – ending up in complete chaos and traffic jams on the water that makes it so much fun to be on the water.

Days before King´s Day people will start reserving spots on the pavements in front of their houses. It is tradition to either sell second hand or handmade stuff. Alternatively, children and students perform any kind of activity to earn a little extra pocket money. Make your booking arrangements as early as possible because Amsterdam is usually packed with tourists around that time. Hotel prices rise sky-high and even AirBnB apartments will be scarce or extraordinary expensive.

On King´s Day you will only be allowed to buy one item of alcohol in the supermarkets. This can be a can of beer, a six-pack or a bottle of wine.

THINGS TO DO In Amsterdam around king´s day The tulips fields are in full blossom. Try out famous Keukenhof as the mainstream choice. This big park is themed around the beautiful flower and is also ideal for families with children. Alternatively, drive to one of the many tulip fields and take your own colourful photo. Even better, go to one of the tulip picking gardens and hand pick your own bouquet of flowers! Contact us for your personal proposal for a tailor made Tulips & Windmill Tour. We will bring you to great sites for taking photos of the tulip fields and picking tulips – a unique experience. This special private tour is only available between April 8th and May 8th. This private tour will bring you to hidden courtyards and narrow back alleys. While walking you will get a great introduction into the origins and historic development of Amsterdam. We will leave the busy center and discover a neighbourhood off-the-beaten-track. The Jordaan is a village within the city!