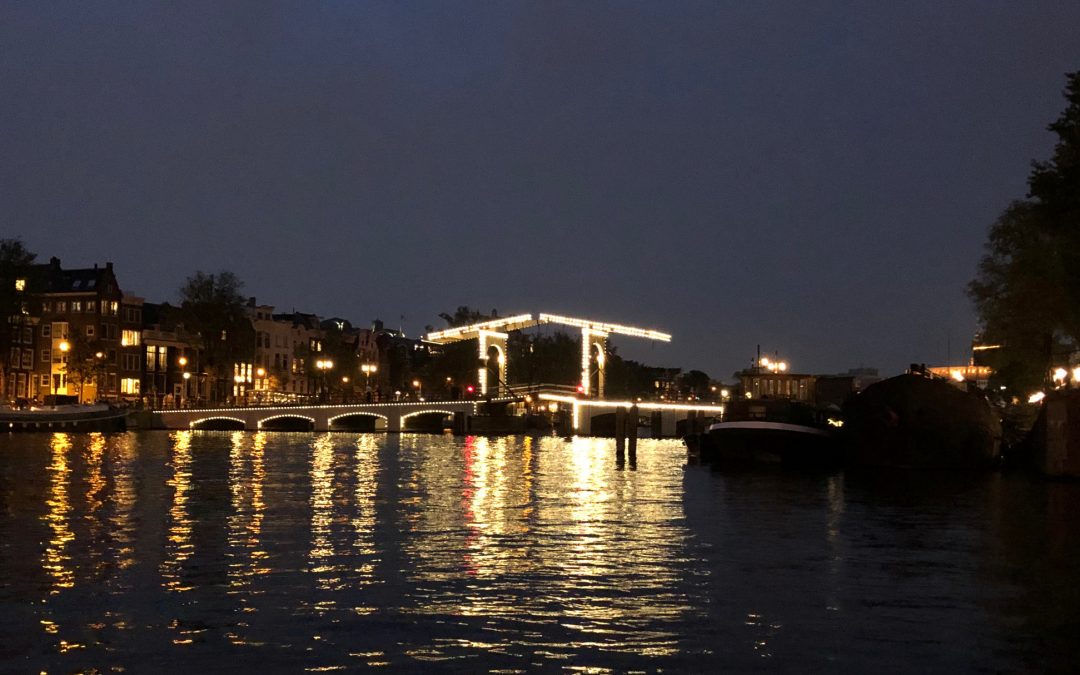 The Skinny Bridge (in Dutch: Magere Brug) is a historical landmark over the river Amstel. Located close to the opera house, the Stopera, it connects the Kerkstraat with the Nieuwe Kerkstraat. A great way to see this highlight is by boat when leaving the Prinsengracht and crossing the bridge underneath and turn into the Keizersgracht.

And here is the first legend about this beautiful bridge being one of the most romantic spots in Amsterdam. According to the believes, couples that kiss passionately while crossing under the Skinny Bridge will be in love forever.

In 1691 the first bridge was built at this site called the Kerkstraatbridge. It had thirteen arches. Due to being very narrow it was given the local name of skinny bridge. According to another legend the bridge was built by two wealthy sisters who lived on opposite sides of the river. They wanted to be able to visit each other every day. But, they were not wealthy enough so they could only afford a narrow crossing over the river. The city archive revealed though that during the Golden Age of Amsterdam a prominent stone bridge was planned. It got never realized because of the economic crisis of 1672. Instead, the smaller, meagre bridge was built.

The bridge had to be demolished in 1871 as it was in a very bad state. The city decided to replace it by a stone bridge that looked the same as the original one but was slightly bigger with only nine arches. The current bridge dates back to 1934 and is a redesign by architect Pieter Kramer with its central section made out of white painted wood. … that it is a so called bascule bridge that can be opened for boats passing through. The counterweights help moving the bridge relatively fast. This requires only little energy.

… that a scene of the 1971 James Bond movie “Diamonds are forever” was shot close to the Skinny Bridge showing it prominently.

… that 1200 light bulbs decorate the bridge. They are turned on every evening.

… that since 2003 only pedestrians and bicycles are allowed to cross the bridge. Cars were banned in that year.

… that until 1994 the bridge was opened manually. Now it can be opened automatically.

THINGS TO DO In Amsterdam If you would like to see the Skinny Bridge you can book a canal boat tour or use the hop-on-hop-off Amsterdam boat.